Wikileaks Scandal – The Good, the Bad and the Ugly 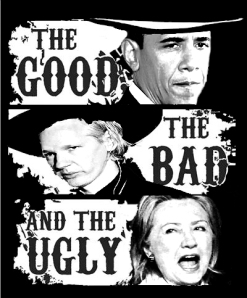 The publication of 250,000 US diplomatic cables last week by Wikileaks.com has caused quite a scandal in both the US and International community. While the legality/morality/goal of such action is dubious, the fact of the matter is that the information is out there and can’t be taken back. That being said, before taking sides on the issue (freedom of speech vs. Assange terrorist), lets analize the effects of such publication:

1. Hillary Clinton ordered a spy operation on UN leadership. The US diplomats were asked to obtain DNA samples, adresses, credit card numbers, phone numbers, tax and pager numbers and EVEN computer passwords from top UN members. Such operation is a blatant infringement of UN laws and individual privacy.

2. The oil company Shell admits to have infiltrated the Nigerian goverment at all levels. To such an extent that a Shell executive boasted that they know exactly everything that goes on within the Nigerian ministries. Such capitalistic, corrupt infiltration of a goverment is clearly anything but “democratic” or ethical.

While unmasking corruption and inmoral actions is always justified (Vietnam, Watergate, in this case the corruption of Nigeria and American espionage in the United Nations) I believe the problem lies not in the action, but in the indiscriminate manner such information was made public. A responsible person would have taken the time to actually skim through the cables and publish that which is useful for society. The data which helps foment human relations.

What is Julian Assange seeking to gain by publishing “provoking” personal correspondence of US diplomats? (such as the one Hillay Clinton states that the Argetinian president seems “mentally unstable” or another that describes Nicolas Sarkozy as “impatient and undiplomatic”) Does this type of personal correspondence help the international community in any way? Or does it merely seek to obtain notoriety and spark bitterness between world leaders?

Just like you wouldn’t inform a patient in intensive care that his parents have just suffered a horrible death; when revealing secrets one has to take the timing and possible consequences into account. In this case, some of the cables published about Iran and North Korea seem more likely to trigger violence than “enlightment” or “transparency”. So while I wouldn´t call Julian Assange a criminal, I would definitely label some of his actions as unthoughtful.

And as for the US goverment, instead of trying to control the release of information (which is impossible), your efforts would be better spent in figuring out ways to better protect secrets so they doesn’t get “stolen” in the first place.

For more information, The Guardian has developed a detailed interface/map of the 250,000 cables