Before the Sunrise, and its sequel Before the Sunset, are some of the best romantic films to ever be written. The dialogue of these two films is the best I seen in years, and will probably see in years to come. The screenwriter duo Richard Linklater, Kim Krizan do an AMAZING job. These two romantic films never have to resort to the action-packed sequences,  cheap humor and gag laughs exploited relentlessly in mainstream Hollywood romances. 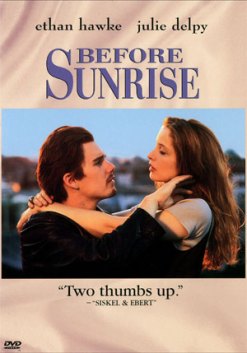 What I truly enjoyed about these two movies is that they talk about something that´s very difficult to talk about: LIFE.

These are not the type of movies that one watches to just laugh and have a good time. Watching these two movies promotes indenpendent thinking and they add meaning to your life.

Here are some memorable quotes I remember from the films:

“We still have to deal with the same shit our parents had to deal with. But this time its different… This time we don´t know who the enemy is”

“There’s an Einstein quote I really, really like. He said: “If you don’t believe in any kind of magic or mystery, basically, you’re as good as dead”

” Anyway, I was in the backyard, playing, and my sister had just taught me how to take the garden hose, and do it in such a way that, uh, (holds his hand up to demonstrate the garden hose technique) you could spray it into the sun, and you could make a rainbow. And so I was doing that, and through the mist, I could see my grandmother. And she was just standing there, smiling at me. And uh, then I held it there, for a long time, and I looked at her. And then finally, I let go of the nozzle, you know, and then I dropped the hose, and she disappeared. And so I went back inside, and I tell my parents, you know. And they, uh, sit me down give me big rap on how when people die you never see them again, and how I’d imagined it. But…I knew what I’d seen. And I was just glad that I saw that. I mean, I’ve never seen anything like that since. But, I don’t know. It just kind of let me know how ambiguous everything was, you know, even death.”

These two movies are PACKED with memorable quotes, the acting is SUPERB and the storyline is REALLY touching. If you want to see a fresh, creative take on romance: I HIGHLY recommend these two films. (this coming from someone who isn’t a fan of the romantic genre)

If you on the other hand, just want to watch lame jokes and laugh: then I would recommend watching another forgettable Hollywood rom-com in theathers.

First of all,  happy new year’s to everydody.  My readers, my family and friends. Vacations were awesome, thus no time for posts.

To kick start the year I would like to examine 2010 Time Person of the Year, Mark Zuckelberg. Who’s the man behind Facebook, the second fastest growing company in the world? A question that is, economically at least, worth noting.

This image is property of TIME Magazine Corp.

How does the 2010 movie “Social Network” portray, the then 20 year-old, founder of Facebook?

In the movie Mark Zuckelberg is portrayed as an ambitious, fearless genius. He is also displayed as a bit of an asshole. Applying my three years of psychological studies here’s what we get as far as personality.

Zuckerberg was born a sanguineous

But then again, it’s a movie. So chopping off the dramatic elements, lets look at the facts for a clearer picture.

Turns out, the Ego behind Facebook is a bit of an egoist himself.

Morale of the story:

Inceptions in your town?

Inceptions, my friends, are ocurring everywhere!! They are happening in your house, in your local department store, in your car, and most frequently in your local theaters. Thats right, whenever someone watches a movie they enter a passive state which allows the ideas and arguments of that particular movie to enter ones mind.

True, the profoundness of these inceptions vary from person to person, but these inceptions can be powerful enough to persuade 11- year old kid to jump off a rooftop in Barcelona thinking he’s superman, to create movements such as the Star Trek culture and can inspire people to do acts of kindness or profound evil. So every time you watch a movie you are also, unconsciously, undergoing an inception.

Then again, inceptions aren’t something new in the history of mankind. Before there were movies, well-written books had similar effects on the mind of people. Famous men across all history have drawn inspiration from the seeds and ideas plowed by those who came before them. The main difference between the inceptions made by books and movies is this: books tend to have a more profound effect on us. This is due to the fact that films require only passive participation from their audience, which contrast with the active participation (the act of reading) books require.

And finally there’s that feeling. That feeling we get when we finish watching a good, profound movie. That feeling of light-headness, slight desorientation, and thoughtfulness we experience on our way to the nearest theater exit. That feeling is our brain’s bio-chemical reaction to an inception.